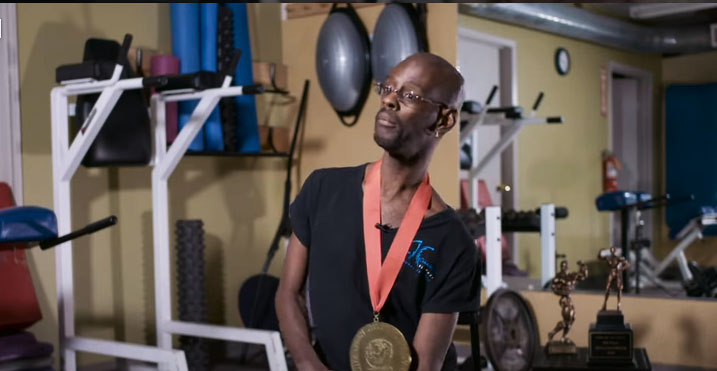 Wade McCrae Washington should be no more than 10 years old, according to doctors' initial prognosis. At only 11 months of age, the Houston-born was diagnosed with cerebral palsy, a condition affecting, inter alia, muscle coordination and motor skills. In its most aggressive form, only 50 percent of people living with cerebral palsy survive the age of 13, and 25 percent reach the age of 30. In addition, a severe scoliosis was discovered in Washington at the age of 12, leaving no hope for an active out-of-reach life. But instead of giving up, Washington decided to push its physical limits and lift weight, as revealed by a new profile of the bodybuilder in Great Big Story, a YouTube video series that highlights unique stories from around the world.

45-year-old Washington has just received his professional bodybuilding card and is on the rise. "Bodybuilding and gym exercises really keep me alive," he said in a video interview. "And if I stopped training in the gym, I probably would have died long ago." Washington is the first Adaptive Pro bodybuilder to the Global Bodybuilding Organization with cerebral palsy and scoliosis, according to his Instagram page.

Wade continues to train with his personal trainer Tina Chandler at the Houston Gym. In the interview, Chandler said she had built devices that would help him secure himself on a bench or other device to better train specific muscles. "The basic happiness that comes from feeling strong and disabled instead of being disabled is a big deal," said Chandler. "I am pleased to be a bodybuilder," said Washington. "It's my lifestyle now."