قالب وردپرس درنا توس
Breaking News
Home / Fitness and Health / Training for a marathon for a baby was not fun, but it helped me to feel better again

Training for a marathon for a baby was not fun, but it helped me to feel better again 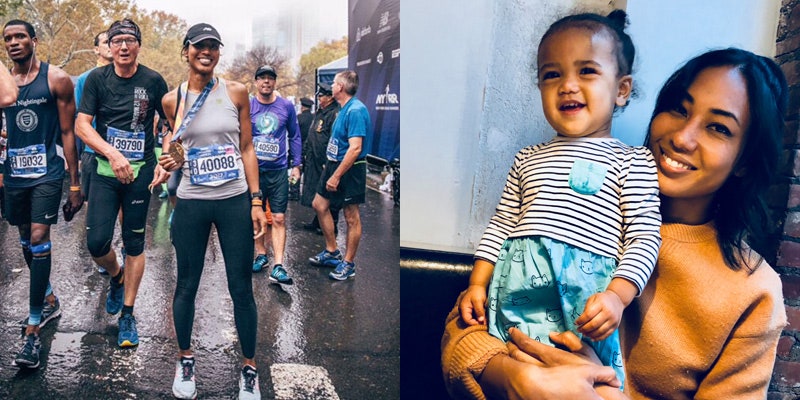 The days after our daughter's birth were blurry. I remember my friend and I packed all our belongings scattered around our outdated hospital room. I remember them as frightened, new parents dressed in their too-large, homecoming outfit, trying to keep us cool while our Uber driver patiently waited for us to figure out how to properly fasten the car seat can. And then I remember coming home and realizing that the difficult part was just beginning. Fatigue certainly played a big role, but so did the confusing elements of our new normalcy. It did not matter if it was day or night. Our birthdays had warned us that a newborn on a schedule is eating and sleeping so intermittently and desperately, as if it's getting you, the untested parent, to see if you're making the cut. The birth hours were right. I followed her suit, ate, slept and nursed to their conditions and could barely get anything out. When I returned to work three months later, I had the pleasure of juggling the needs of a tiny baby with a full-time job.

After a short time, of course, I decided for the best for me was to train for a marathon . I was invited by New Balance, a sponsor of the New York City Marathon one of the most famous races in the world and one of the few that I told myself I wanted to think about, after I had struggled a way through two previous. The promise of that boost of self-confidence that I would feel afterwards was tempting. There are not so many other goals in life that pay off in such a noticeable and measurable manner in a relatively short time. I knew what to expect; Train for a set number of months, complete the required number of miles, endure physical pain and emotional roller coasters during training and on race day and boom: cross the finish line and benefit from all my hard work.

As As a new mom, I needed all the self-confidence I could get. In order to use a suitable metaphor, I had spent the months since my daughter was born looking for my foundation. My transition to motherhood began alarmingly. After an uncomplicated, uncomplicated pregnancy, I had an ambulance and subsequently suffered a life-threatening infection. What I thought was a happy 48-hour stay turned into a seemingly endless series of days of learning how to care for a crying newborn while I was so sick and weak that I could not get up. Most of the time I spent in pain and fatigue, with an infusion cart and a hospital-grade pumping machine trying to collect the droplets of colostrum that my body had put into breast milk.

Since then, I have penetrated deeper into a new reality where certainties seem to lie only in the confusing vague concept of the "mother instinct". I'm not very confident, I googled almost anything I could think of: when to worry about fever, what does it mean if your baby does not stop crying when you drop it off? Overwhelmed by the unknown, I thought that walking, which had been part of my life since my youth, was the best way to connect with a version of my old self that knew the form of things. The certainty of putting my foot on the road, as I have done countless times, and seeing the miles on my watch predictably rise was tempting.

After I actually started training, I found that I even found my familiar terrain changed. Instead of being able to walk (or hesitate), I was tied up for lack of time. If I was particularly slow one day, I could not spend more time reaching my mileage target. I constantly rushed from work to the gym and back home and did it again the next day. It was not fun – it was indeed a hectic time in my family – but I needed it. Even if I was constantly carrying out a series of guilty calculations in my head: I had been away from my daughter for so many hours . Or, If I do not speed up my step, I owe so much money to the babysitter . Although sometimes in the middle of the day I was only able to train in midsummer (special thanks to the Lyft driver, who worried me how he sweated and gasped in the back seat of his car after a short long run) to a food truck on the street, to buy me cold water). Even when my milk supply dropped sharply, I found out how to eat for both marathon and baby.

Even if I constantly had this feeling of being selfish or not doing enough, I felt happy when I was traveling. It was not just the runner-up of 19459006 (19459022) that made me feel better, though the regular increase in endorphins certainly did not hurt. My body, which demands its mechanical memory during a run – the feeling that my legs loosen after two kilometers, my lungs find their rhythm while breathing a long session – was reassuring in their familiarity. I had to consciously take time to walk, and for a few hours I was able to move away from a routine of new experiences and commitments. Recognizing all this was a simple motivation to get me out of the door if I felt like skipping a workout. It was nice. On race day I was doing well, much better than in previous marathons, when my time was strictly mine.

One year later, with my daughter, now a toddler, and comfortable in maternity (why?) Yes, I sang several times as Baby Shark, as I can count!), Mine is Clearly, training for a marathon helped me make the transition to this life-changing "mother" phase. I surprised myself with the question of how much my personality, which had been habitual for the last three decades, welcomed these changes. How proud of me was that I could leave the house three hours earlier and walk 18 miles to work, even though I disturbed myself in a marathon season because I felt I was "not a morning person" ]. "How much I needed the limitations of a training plan to help me change my perspective. Knowing that my hard-coded run habits could become so fluid that gave me the confidence to accept the other changes in my life. Maybe it's never the same again (you will not sign me up to find out), but in that chaotic first year, training for a marathon was exactly what I needed to feel right again.