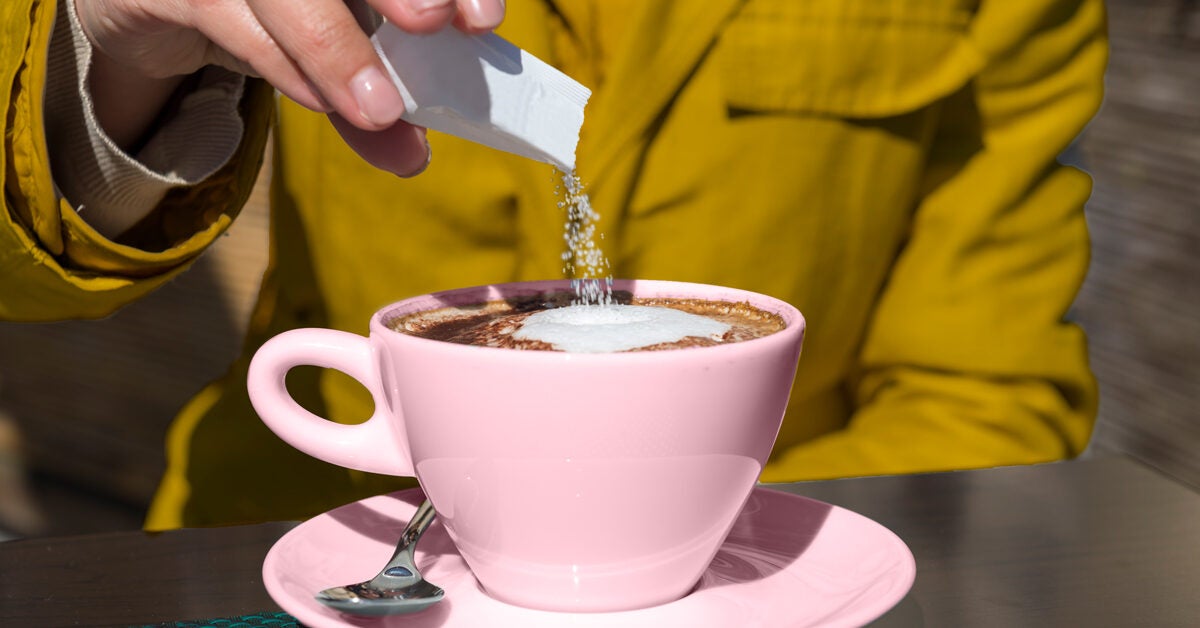 While we all enjoy Ben and Jerry every now and then, too much too often can cause your sugar intake to skyrocket. According to the American Heart Association, American adults eat about 77 grams of sugar a day, which is roughly 60 pounds of sugar a year!

This is where sugar substitutes like stevia come into play. Stevia is a no-calorie sweetener that will give you the sweet taste you are looking for without the high calorie count of sugar.

Sounds too good to be true, doesn’t it? Well, while stevia is generally safe to use, it does have some side effects that you should consider before adding it to your coffee.

Stevia rebaudiana is the plant name for stevia, which belongs to the same family as the sunflower (Asteraceae). The products you buy at the grocery store do not contain the entire stevia leaf, but a highly refined extract called rebaudioside A (Reb-A).

Reb-A is a form of steviol glycoside that is about 200 times sweeter than table sugar and is typically combined with other sweeteners. For example, Truvia is a mixture of Reb-A and erythritol (sugar alcohol), and Stevia in the Raw is a combination of Reb-A and dextrose (glucose).

Remember, stevia is roughly 200 times sweeter than OG sugar (a little goes a long way!). Can you use too much

2 milligrams per kilogram of body weight. That’s roughly 10 packets of stevia for a 150 pound person.

Current research shows that certain forms of stevia are A-OK. Reb-A-Stevia leaf extracts that you can find in the grocery store are generally recognized as safe (GRAS) by the FDA.

A 2016 study also found that all forms are likely to be safe for general use. However, the FDA does not recommend consuming stevia leaves and raw extracts, which are both less refined stevia compounds. (Therefore, it may not be okay to grow and use your own stevia leaves.)

It’s also important to read labels on stevia products if you’re looking to avoid artificial sweeteners. Stevia is often combined with other sweeteners such as:

And when trying to get the most out of your stevia, you should also be aware that some stevia products contain “natural flavors”.

The FDA is generally cool with these ingredients, and foods with this label shouldn’t contain any artificial or synthetic colors or flavors. However, the “natural taste” could also contain ingredients that are highly processed.

Get the good stuff!

Check these labels out! To get the purest form of stevia, choose a calorie-free sweetener that contains at least 95 percent steviol glycoside (also known as Reb-A).

Stevia glycosides like Reb-A are classified as safe by the FDA. But like most things, stevia still has advantages and disadvantages. Here are the main side effects to look out for while using stevia.

Stevia is often combined with other sweeteners that have their own side effects. Sugar alcohols like erythritol can cause some stomach problems if you are particularly sensitive to them. Consuming too much can lead to symptoms such as:

According to a 2019 review, stevia alone can promote the growth of some bacteria that are important for bowel function.

It was also previously believed that too much stevia might actually lower your blood sugar levels too low, but further research has shown that it is unlikely.

A 2020 study found that people with type 2 diabetes who drank 1 cup of tea sweetened with stevia every day for 8 weeks did not have significant changes in their blood sugar levels.

This side effect can be good news or bad news for you depending on your individual health.

Stevia also has a way of making your blood vessels cool, widen, and pump blood around your body easily, all of which helps lower blood pressure overall.

In a review from 2016, a study of more than 100 women with high blood pressure is discussed. After consuming 0.25 grams of stevioside (another form of stevia similar to Reb-A) daily for 1 year, their blood pressure dropped.

As with lower blood sugar, this side effect can be either positive or negative for you depending on your health.

There’s no evidence that stevia can cause cancer, and research suggests it might actually help cancer patients.

Test tube cell studies have shown that stevia has anti-cancer effects on cells. A 2018 study found that stevia was as effective at inhibiting six different gastrointestinal cancer cells as chemotherapy.

A study published in 2017 found similar results but focused on breast cancer cells. Depending on the dosage, stevia stopped cancer cells from growing, resulting in more cell death.

Do not rely on stevia for the treatment of cancer, but you should be sure to consume it in moderation.

There is limited research on whole-leaf stevia and its effects on pregnancy and postpartum babies. However, stevia made with Reb-A has been evaluated and is believed to be safe during pregnancy.

Just don’t overdo it – stick to a few sachets or teaspoons a day.

Side effects like lowering blood sugar and blood pressure can be a plus from stevia for some people.

A 2020 review of studies in humans and mice found that stevia could have medicinal uses to help control glucose, lower inflammation, lower blood pressure, and lower cholesterol. However, more research is needed.

Other good news: Since 2008, there have been few to no reports of hypersensitivity or allergies to stevia. The same review mentions that all reported allergies are due to improperly filtered stevia extracts.

Probably the biggest and most obvious benefit of stevia is that it helps you reduce your sugar intake.

Too much table sugar can lead to weight gain, blood sugar problems, and an increased risk of heart disease. Choosing a sweetener like stevia can reduce the amount of added sugar in your diet and your chances of dealing with these conditions.

Too much sugar is also not very kind to your smile. Choosing a product like stevia could help reduce the number of cavities you have, resulting in fewer trips to the dentist. 😁

How to use stevia

You can use stevia in much the same way that you can use sugar in beverages and on food, but it does much cutie pie.

2 to 4 drops of stevia liquid = 1 teaspoon of sugar

6 to 9 drops of stevia liquid = 1 tablespoon of sugar

If you want to bake with stevia, read the instructions on the stevia product of your choice or opt for a baking-specific stevia. Generally speaking, using stevia will cut the amount of sugar needed in a recipe in half, but this can vary.

Stevia needs further study to review the pros and cons that could come with it. However, current research shows that most stevia extracts are safe to consume and have limited complications as long as you use a quality product.

If you start swapping sugar for stevia and notice any strange side effects, stop using it and see your doctor as soon as possible.