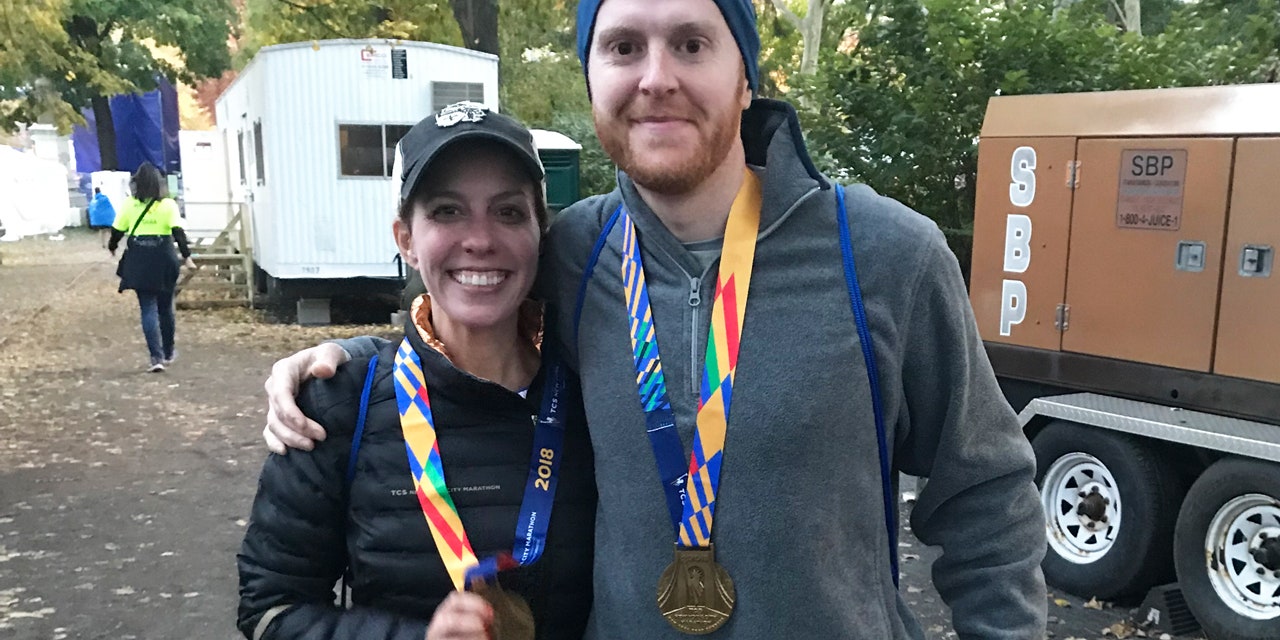 If someone told me when I was 20 years old that I would run a marathon with my husband one day, I would say that they made delusions.

My husband played sports most of his life and ran the 100- and 200-meter sprints in high school. I, on the other hand, tried it on my junior high track team and was promoted to deputy manager, replacing my gym shorts with a clipboard. I did not walk until adulthood.

My dad died when I was in my 20s and I used distance races as a form of therapy . It's been 12 years, a few triathlons and a couple of half marathons later, and running has become my favorite hobby. I am incredibly slow and still mostly unathletic, which is why I was too scared to run a marathon. But when New Balance inquired about the desire to be interested in a place in their team for the TCS New York City Marathon I could not miss the opportunity. 19659004] I knew that if I wanted to train and achieve this goal, I would need a person by my side: my husband Nate.

So we started the first marathon as a couple. 19659006] The training began in July. In New Orleans. Nice. We put together the painfully wet runs and although this would appear to be the most terrible activity in the world, we actually had training as a couple. I received the guardianship of John Honerkamp, ​​founder and CEO of J.R. Honerkamp Consulting & Coaching, whose online training program was a great support to Nate and me. Basically, every day we got an email from our run, along with a helpful tip, and his personal expertise was an email or a phone call.

During this time, there were some surprising things about training a couple that I liked.

First, the long distance race forced us to stay at the weekend, if we had not been sociable otherwise. There were many sober movie nights.

I also loved that there was a common goal: our job was to finish the race and run all the time without focusing on speed. We had planned to start together, but since Nate is obviously faster than me, we would stop to race at our own comfortable pace and catch up with a tent after the race.

Finally, I liked that until the race was exciting and scary and gave us something new and healthy to focus on and talk about. We planned meals, shared playlists, stretched out while watching our favorite shows, and shared tips on finding the city's best public bathrooms on our run to Superior Chafing Balms . Romantic, right?

On the day of the marathon we came four hours earlier to the construction site and spent the morning in a corner. We were more nervous than on our wedding day.

We read the newspaper, stretched it and calmed the other's nerves. When it was time to line up, Nate and I started the race together and held hands as we walked to the start line. How cheesy is that? Yes, it was definitely more nerve-racking than going down the aisle.

When the launch cannon started and we started the race, it was exciting. I had expected Nate (understandably) to step out in front of me, but we rounded the first five miles at a relaxed pace, which helped shake our nerves, and was the ideal way to start our first marathon together.

The next 17 miles were a blur, and I loved every minute.

Although I did not use Nate, I often thought of him. In a situation that could be competitive for some people, all I wanted was for him to have the best course of his life.

Only at the end did I feel tired. I had received so many great tips during my training, and my favorite was to devote miles to loved ones during the fight. For me that did not come to mile 24, which I quietly dedicated to my mother. I've been thinking about how she always has a positive attitude, whatever the circumstances, and I swore I'd do the same thing right now. Big grin and high-fives got me through. I dedicated 25 to my father. I know that he would have loved to cheer me on, and that my drive and persistence stems from him.

Over the last 385 meters to finish I thought about Nate and the hard work we put into this work race and how happy I was to have him for a bucket list. And then I saw his face.

I've heard that people became emotional during marathons, even though I felt nothing but pure joy throughout the race. (Well, enjoy a side with shin splints.) But when I saw my husband waiting for me at the finish, we both strangled and hugged each other.

After meeting with a group of friends, Feier, Nate and I had our own two-person party and ate a glass of wine in our hotel bar. We talked about the day and went through every amazing moment; strangely enough, it felt like we had recast our wedding anniversary so many years ago.

Within a week of the race, we have already decided that we will do another. I'm assuming that we run as a couple until we're old and gray. At the moment, however, I am ready to tackle # 2 with No. 1.