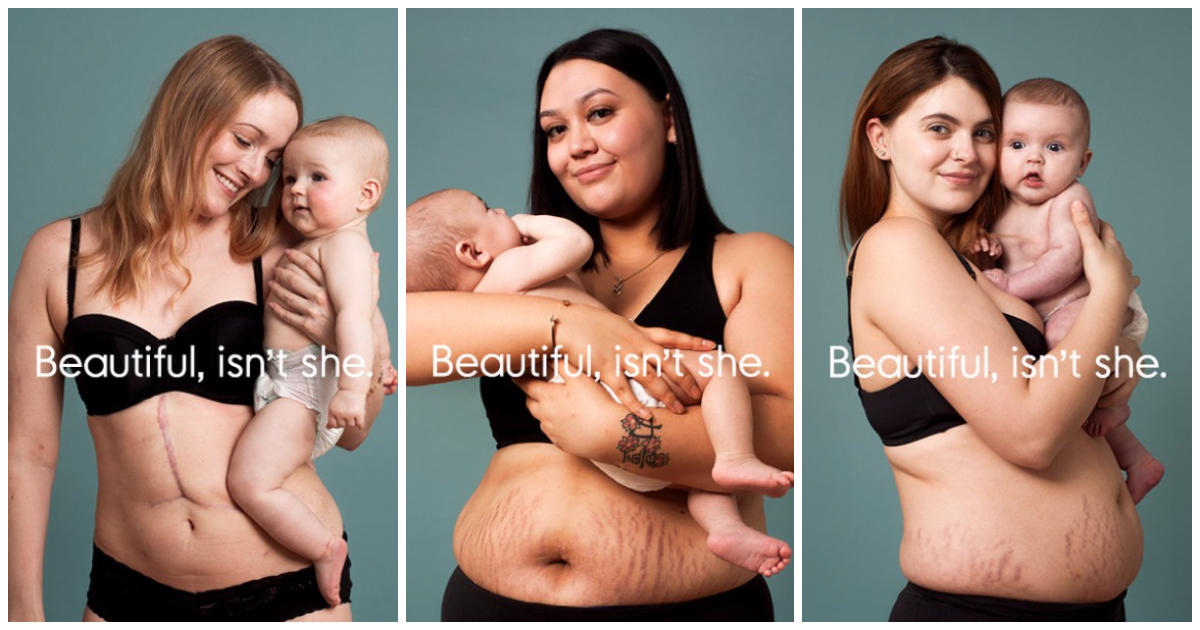 Photos: Mothercare / Sophie Mayanne [19659003] If you've just had a baby, you should lose weight last but society is putting pressure on women to focus on their baby body. Retiring Body – A British Motherhood The Mothercare brand is officially over.

Her new campaign, #BodyProudMums, features unrestrained photos of 10 women flaunting their scars, stretch marks, sagging skin and swollen bellies weeks and months after birth. Their message is simple: it's time to stop upholding unrealistic beauty standards and encourage women to accept their postpartum bodies as they are.

The company opted for this body-positive approach after conducting a survey in which more than 80 percent of mothers admitted that they would compare their postpartum bodies to women who see them on Instagram and in magazines. "Body Prou ​​d Mums boldly strives to normalize women's experiences, start a positive conversation, and help mothers feel confident and proud of their bodies," they said on their website. "At the center of the campaign is the belief that all mothers are beautiful, after all, their bodies have just done a miracle." (See also: Denise Bidot explains why she loves the stretch marks on her stomach.)

As part of the campaign, each of the featured mothers shared what it meant for them to be part of that experience.

For example, Harriet was photographed 26 weeks after birth. She has said that she has loved the idea of ​​celebrating postpartum bodies since she has been struggling with her self-esteem since having her son. "I used 4 1

/2 stones (63 pounds) during pregnancy and have lost about 2 1/2 (35 pounds) so far," she told Mothercare. "How can I hate my body when he gave me my beautiful baby? My body did something amazing, and for me it's the strongest, I feel like doing it for all the mothers who wear baggy tops or weeping when they look in the mirror Saying: You are unbelievable! "(See also: How Emily Skye's Pregnancy Transformation Caused Her to Ignore Negative Comments)

Tina, 27 weeks after she had had twins, said How her body and lifestyle have changed since birth. "Before the birth, I was muscular and had a lot of training," she said to Mothercare. "Now I have no time to train and everything feels more sinful! I did not expect to suddenly feel so old and hanging! I know it will take time and dedication to get back to training, but now I want to I do everything you can to cover it up with loose clothes. "(See also: 9 Things You Should Know About The Postpartum Exercise And Probably Not)

It's hard for Tina to get past the perfect before-and-after photos who flood their social media pages. "Everywhere in the social media, it shows those perfect bodies saying they had children and are coming back so quickly … I think, pre-chins have unrealistic expectations, and I push myself to get my body back As I slowly get into motherhood, I find that it's actually not that important, and I just have to be OK in my own skin instead of worrying about what everyone else thinks. "(See: What about America Ferrera Missing her body before pregnancy may surprise you)

At Mothercare we believe that all mothers are beautiful and proud of their bodies should be. #BodyProudMums Tina, 27 weeks after the birth: "I'm not a fan of my new body. Before the birth, I was muscular and worked a lot. Now I have no time to exercise and everything feels smarter! I did not expect to suddenly feel so old and hanging. I know it will come back with time and dedication to do sports again, but right now I just want to cover up with clumsy clothes. Every day I feel pressured. Society, social media and people's comments make you feel that way. Throughout social media, it shows those perfect bodies saying they had children and are now recovering so quickly. I remember being really surprised when Kate Middleton came out of the hospital with Prince George. She had the baby bump, and I remember being surprised that the abdomen did not just go down after giving birth. I also thought how stupid I was ever to have thought. I think pre-children have only unrealistic expectations. I'm also under pressure to get my body back, but as I slowly progress into motherhood, I realize that this is actually not so important, and I just have to be OK in my own skin instead of worrying about it. what everyone else thinks.

Ever since Mothercare shared his campaign on Facebook a few days ago, mothers around the world have shown their support for messages and photos to truly speak to them. "Seeing it brings tears to my eyes," wrote a mother. "My little boy is only eight weeks old and I've been heavily weighted and have many stretch marks, but I totally agree with that … Being the best mom I could be is more important than coming back to the body before the pregnancy. "

Another said," My little boy is 2 years old in May and my stomach is covered in stretch marks from my first little boy, and I still have all my flabby skin, but I do not care I've managed to bring three beautiful boys to the world. "

We congratulate Mothercare – and all the mothers involved – for celebrating post-partum body parts. I hope that mothers everywhere can identify with these women and feel safer with all the changes that motherhood brings.