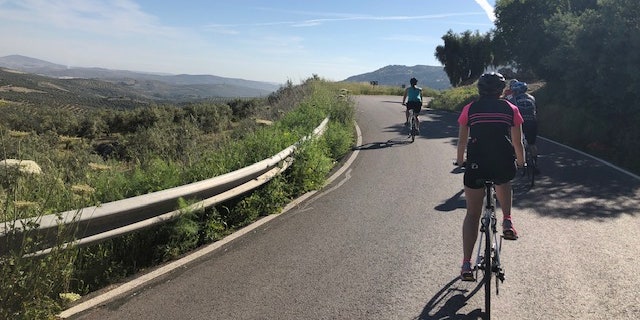 In my family – and actually in my entire hometown of Boulder, Colorado – I'm a bit of a bicycling black sheep. That's because, though I was born, I grew up and currently in the bike-friendly city of the USA designated " Paradise for cyclists " and " bicycle heaven "I have very limited experience with the sport itself.

Yes, I know how to ride a bicycle, and I pedaled lazily and sporadically all my life, mostly only a few miles up Once, either for fun or to commute quickly around the city, I also tried indoor cycling lessons when teenagers spent only a short time with triathlons and occasionally wrote about the sport for work Wear cycling clothes and take to the streets for proper training? Not my cup of tea. Not at all.

Worse, I've never been so keen to become a biker It's basically blasphemy a boulderer has to admit, but I just feel that way. Or rather, how I felt … until this spring, when I pedaled more than 200 miles. In 6 days. In another country.

Forget the deep end – I threw myself into the middle of the damned ocean. And it questioned all my assumptions about cycling.

My attitude before the journey

The majority of people in my inner circle – my parents, my friend, my roommate – love cycling. And I've been listening to them for a long time how they swarmed about the activity. I was glad, but skeptical, that I too could ever feel that way.

There are a few reasons I have used to justify this dislike. My biggest complaint was that cycling always seemed an inefficient form of training. Are you training but sitting at the same time? I would rather make a run that seemed to strain my lungs – and really my whole body – much more than any bike ride. Besides, I was not a fan of cycling equipment. Call me in vain, but the tight, padded shorts reminded me of diapers for adults, the tight-fitting jerseys did not suit my style, and the strangely shaped clip-in shoes just looked alien to me. I understand that everything is designed to make you faster and more comfortable, but I simply did not like it.

All that was said when REI Adventures sent me a solemn email invitation in March – come Ride a bike for a week, eat and explore your way through Southern Spain as a member of the media – I saw it as an opportunity to challenge (and hopefully change) my attitude to sport. There were the tiny (OK, big) restrictions participants were supposed to follow three months before the one-week guided bike ride totaling more than 379 kilometers, as well as the opportunity to spend a full day in the saddle. In my case, both were not really true, but I just shrugged. I would be fine, I thought. Biking was not that hard anyway, right?

That's how I behaved for the next seven weeks before I left. Although I should have used this time to improve my strength and ability on the bike, I only rode a handful of rides without changing my usual running training and strength training . This affected the cyclists in my area (rightly so). My father, who told me to pedal three to four days a week, constantly harassed me for driving with him before or after work. My roommate invited me at 6 o'clock in the morning. Indoor cycling courses; My friend suggested tackling the 45km drive from Boulder to Denver together (which we never did). The only smart thing I did was the purchase of cycling gear (jerseys, shorts, socks, and gloves) that I had learned quickly and that was really comfortable and padded cycling shorts essential for a comfortable fit , My first biker myth has failed.

I arrived in Seville (Spain) – our first stop on the journey through the Spanish region of Andalusia – with heavy jet lag and swollen ankles for more than 24 hours. I got nervous about cycling, which would start the next morning. Fortunately, the first day started relatively easily with one of the shortest kilometers of travel (about 29) and challenging but not overwhelming climbs. More importantly, the landscape was simply mind-blowing. We cycled on a paved, winding road, flanked by yellow and white wildflowers and ancient cork trees with twisted trunks. Birds chirped around us, and the sky shone bright blue. I did not focus so much on cycling but instead got enchanted by my surroundings.

The second day was somehow even more beautiful. We drove a total of about 56 km, including a long stretch on a converted old mining track, past fields filled with red and yellow poppy seeds, which looked like a scene from Wizard of Oz . There were solid sections of hard work that made my heart beat faster, and quads riddled with funny sections of lush descents. I slowly realized that cycling could be difficult if I drove long enough and climbed steep hills. As I tried to push myself through the climbs to see how fast I could get up, I started practicing my cycling and found it funny, exciting and challenging. At the end of the day, after spending more than eight hours outdoors (including bike rides plus breaks and a leisurely picnic lunch), I felt like a kid who was just on a packed day at the summer camp and at the same time was in full swing life, while it was also completely exhausted by all the physical activity.

Then it got right on the third day when we climbed 16 km over the historic city of Córdoba, and even even more on the fourth day right when we reached the steepest hills of the week, while we were about 75 Kilometers of seemingly endless fields of olive groves drove past. So far, I did not know the mountain rating system, but soon realized that a 12 percent mark was a damn steep ascent. After approaching a 12-penny, I was out of breath and felt my legs burn when I saw the sign that a 14-percent hill was ahead of me, which cursed me aloud and then let me start, crazy laugh. What the hell is happening? I thought as my heart throbbed and my legs begged for a break. I'm on this wild bike ride and no biker! I fought my way up the mountain fighting the urge to jump off my bike and just walk. As I miraculously made it to the top, my newfound respect for cycling got bigger and bigger. If you pull yourself and a bike up a steep hill with the strength of your legs and your core, you need to gain serious stamina, strength, and concentration, and hurt so badly as other activities do. Another biker myth that has failed.

Throughout the week I learned from the guides and other participants more about the right form of riding, which gave me more confidence and opened my eyes to the fact that there is more technique than I realized when biking. Day after day, I was given respect and esteem, and I dared to say – love of sport.

Towards the end of the journey we drove south and east to our final destination in Grenada and came even more past olives orchards and panoramic views of the snow-capped Sierra Nevada, all that kicking took a physical toll. A bone deep fatigue spread to almost every part of my body, the skin under my butt cheeks began to rub (sorry if the TMI is), and oddly enough, the middle toenail on my right foot dropped (again), sorry). Nevertheless, my new and unexpected passion for cycling only increased. On the last day I was so excited about our daily routine that I was disappointed when we had to cut our last trip because of the planned logistics. It's funny how quickly my attitude changed from hesitant and dismissive to bicycling in just six days, becoming totally addictive.

What I Now Think About Cycling

My whirlwind week in Spain cost me a toenail and some skin my butt, but I came away with something much bigger: a deep appreciation for cycling. Now, as I recall my earlier arrogant mistake, I almost startle that the sport is "easy". Driving over 200 miles through Spain has proven that cycling can be absolutely difficult and requires skill, strength, endurance and technique. Apart from the physical challenge, I have learned that this is undoubtedly one of the best ways to really immerse yourself in nature . Unlike running, I can do cycling all day and the sounds and smells I feel (sometime on the fourth day, I took in a heady touch of olive oil). It feels more like an adventure than just a standard workout.

Well, I would not say that I'm a total biker (to be honest, I only raced once since the trip), but I'm not a total beginner anymore. And I'm looking forward to getting in the saddle soon with my bike-loving friends and family and finally enjoying the ride.