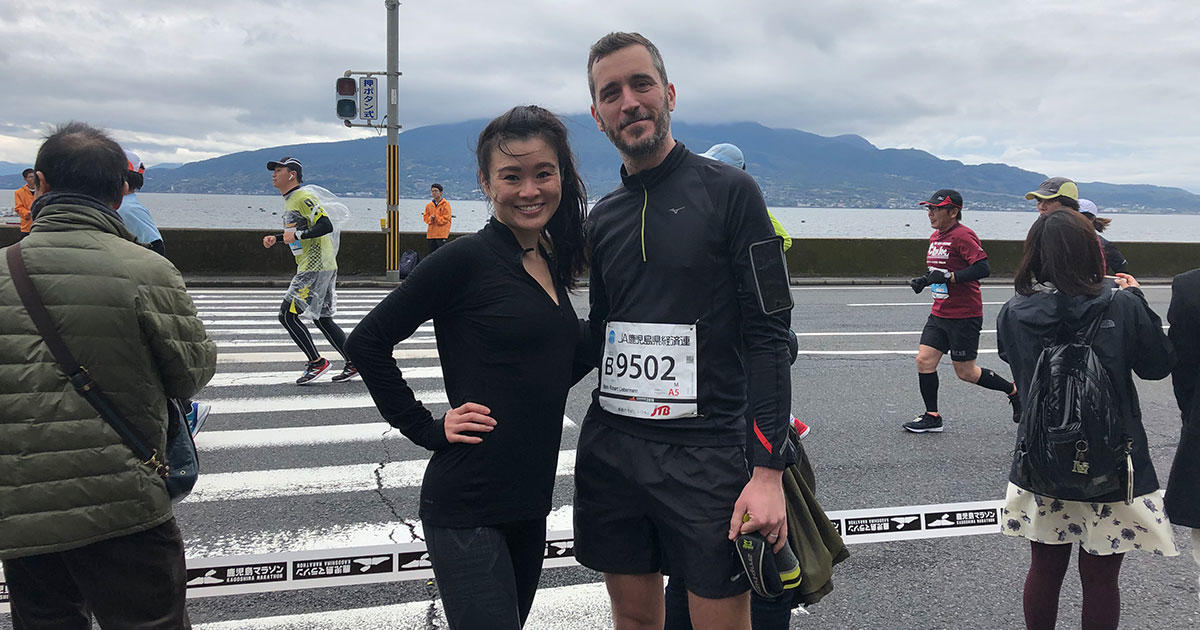 I never thought I would run my first marathon in Japan, but fate intervened and ran forward: I am surrounded by a sea of ​​neon-green Running shoes, determined faces and Sakurajima: an active volcano hovering over us The thing is, this race * has * almost * not happened. (Ear: 26 errors * Not * before you run your first marathon)

Since I was young, Cross Country runs I was angry, and I had the best of it, to take that sweet step and step, and I was forced to absorb my natural environment. After college I did an average of 1

1 to 12 miles a day. It soon became clear that it was me. I push myself too hard. Every night, my dorm room was filled with the smells of a Chinese pharmacy, thanks to the endless series of numbing ointments and massages I was feeling. I calmed my pain and pain.

The warning signs were everywhere – but I stubbornly decided to ignore them. And before I knew it, I was stuck with such strong shinguards that I had to wear braces and get around with a crutch. The recovery took months, during which time I felt as if my body had betrayed me. Soon I gave the sport a cold shoulder and took on other forms of fitness with little impact: cardio in the gym, strength training, yoga and Pilates. I ran away from running, but I do not think I've ever really made peace with myself or forgiven my body for this self-assured "failure."

That is, until I ran this marathon in Japan.

The Kagoshima Marathon has been held annually since 2016. Interestingly, it lands on exactly the same date as another major event: the marathon in Tokyo. Unlike the big city vibes of the Tokyo race (one of the five Abbott World Marathon Majors), this charming prefecture (region) is located on the small island of Kyushu (about the size of Connecticut).

Upon your arrival you will be immediately impressed by its beauty: it offers the island of Yakushima (as the Bali viewed by Japan), landscaped gardens such as the famous Sengan-en and active volcanoes (the above-mentioned Sakurajima). It is considered the kingdom of hot springs in the prefecture.

But why Japan? What makes it the ideal place for my first marathon? Well, it's over-cheese to admit that, but I have to go to Sesame Street and a special episode titled "Big Bird In Japan". This big ray of sun had charmed me positively with the land. When I got the opportunity to run Kagoshima, the boy made sure that he said yes. Although I did not have enough time to train properly.

Fortunately, as far as marathons are concerned, Kagoshima is a comfortable run with minimal height differences that runs smoothly compared to other big races around the world (Um, like this race, which is equivalent to four marathons up Mt. Everest and running down.) It's also with less than 10,000 participants (compa red to the 330,000ers who have driven in Tokyo), and therefore everyone is incredibly patient and friendly.

And did I mention that you are walking next to an active volcano – Sakurajima – which is only 3 km away? Well, that's damn epic.

I did not really feel the gravity of what I set out to do until I picked up my bib in the city of Kagoshima. This old "all-or-nothing" attitude from my past running career reappeared – for this marathon, I said I should not fail. Unfortunately, this kind of thinking has led to injuries in the past. However, this time I had some days to work before the start of the race and it helped me to relax seriously.

The ultimate preparation for the race.

In preparation, I took a train one hour south to Ibusuki coastal town on Kagoshima Bay and (inactive) Kaimondake Volcano. I went there to hike and decompress.

The locals also encouraged me to go to Ibusuki Sunamushi Onsen (natural sand bath) to get much needed detoxification. According to a study by Nobuyuki Tanaka, Professor Emeritus at Kagoshima University, the "sand-bath effect" is a traditional social event and ritual that has been proven to relieve asthma and improve blood circulation. All this would help my run, so I tried. The staff shovels naturally heated black lava sand all over the body. Then "steam" for about 10 minutes to release toxins, release negative thoughts, and relax. "The hot springs will comfort the mind, heart and soul through this process," says Tanaka. In fact, I felt more relaxed afterwards. (PS Another resort in Japan also lets you dive into craft beer.)

The day before the marathon, I ventured back to Kagoshima city to Sengan-en, an award-winning Japanese garden known for its relaxation and center your Reiki (vitality and energy). The landscape was definitely conducive to calming my inner nerves before the race. When I went to the Kansuisha and Shusendai pavilions, I finally decided that it was okay if I could not finish the race or not finish.

Instead of beating up on myself, I admitted it was important to listen to the needs of my body, forgive and accept the past, and let go of all this annoyance. I realized that it was a win that I even took part in the race.

On the day of the competition, the weather gods were merciful, we were told that it would rain heavily, but when I opened my blinds, I saw clear skies. It went smoothly to the start line. The property I stayed in (Shiroyama Hotel) had a pre-race breakfast and all transportation logistics to and from the Marathon grounds. Phew!

Our shuttle bus was injured We were greeted towards the city center and were greeted like celebrities with a sensual overload of life-sized cartoon characters, anime robots and more. Being in the midst of this anime mess was a welcome distraction to calm my nerves. Our way towards the start line and just minutes before the start of the race, something wild happened: Suddenly, in the corner of my eye, I saw a billowing mushroom clump. It came from Sakurajima. It was a ash rain (!!). I suspect it was the way the volcano announced: "runners … get ready … get ready …"

Then the gun shoots down.

I will never forget the first moments of the race. Next, move like molasses, because the volume of matched runners is large. And then everything suddenly turns in the direction of the speed of lightning. I glanced at the sea of ​​people in front of me and it was an unreal sight. For the next few kilometers, I had some out-of-body experiences and thought to myself, "Wow, am I really doing this?" (Here are other thoughts you'll likely have while running a marathon.)

My run was strong until the 17 o'clock mark when the pain started and my knees began to buckle – it felt like it was going to someone take a jackhammer my joints The "old me" would have burned insultingly and furiously and thought, "injury be damned!" Somehow, with all this mental and meditative preparation, I decided not to "punish" my body this time, but to listen instead. In the end, I had about 14 miles, just over half. I did not stop. But over half? I was pretty proud of myself. Most importantly, I did not beat myself up afterwards. In terms of prioritizing my needs and honoring my body, I went away with pure happiness in my heart (and without further injury to my body). Since this first experience was so enjoyable, I knew there could always be another race in the future.