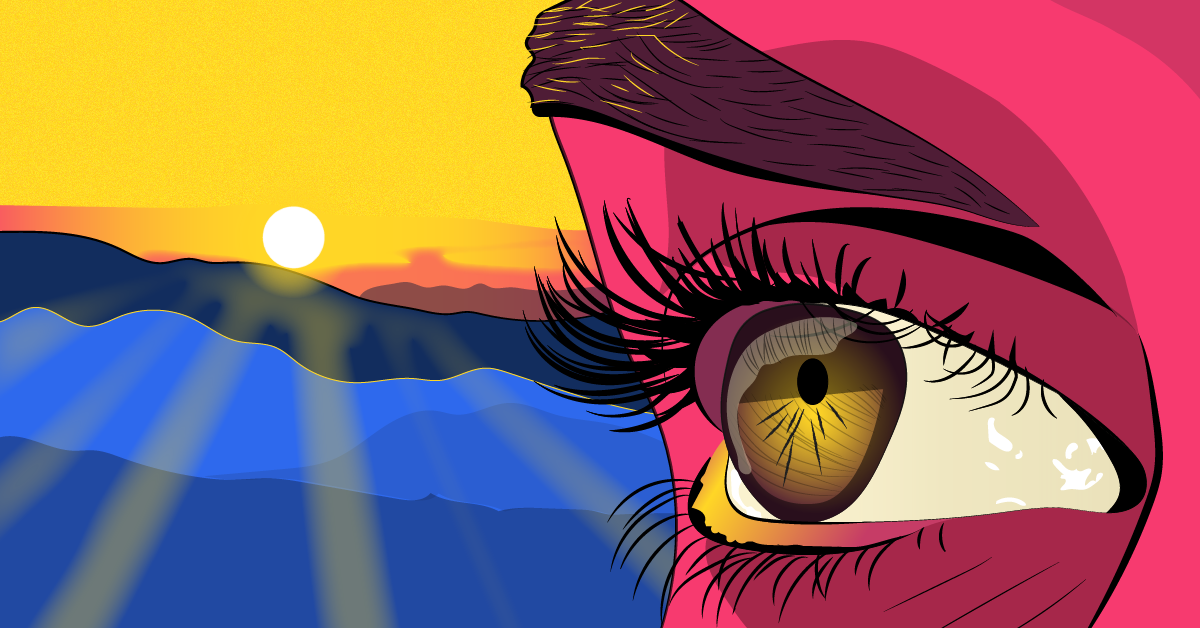 When I tried to renew my driver’s license on my 21st birthday, I found that I was going blind.

After botching the eye exam, I went to an optometrist for a typical prescription for glasses. As it turned out, my eyes were on the way to being about as useless as my expired license.

It was a damn good birthday present.

My vision in my left eye was rapidly dropping while the right eye was gradually becoming blurred. At first that meant just a little bit of difficulty reading without my new glasses. However, within a year it would be dangerous for me to drive at night.

I was working as a pizza delivery guy at the time, so it seemed more and more likely that if I dragged someone̵

7;s oversized meat lover, I would cause harm to myself or others at some point.

The main problem for me has always been color and light distortion. Because of the bulge in my cornea, each individual light source was refracted into about a dozen separate points of light, and each of those points of light was surrounded by a washed out halo.

So imagine what it was like to drive with tons of colored lights all over the place at Christmas time. And when I lived in rainy Washington state, the rain on my windshield continued to distort the lights and make matters worse.

When I got rid of my car at the age of 24, driving had become like moving through a shapeless, melting plasma of light and color. There were times when I literally had no idea what was ahead of me and it was only by sheer luck that I made it to where I was going.

The only solution to my condition was to get a corneal transplant for the worst of the two eyes – an expensive procedure that was way beyond my capabilities. It would be over a decade before I finally had health insurance (thanks Obama – really).

At this point my vision was terrible, I had one dramatically lazy eye, and I often wore one eye patch over the other. Just call me Nick Fury. The people did it.

My surgery was relatively quick and completely painless, although I woke up towards the end to see them stitching my new cornea in place.

I was told I could remove my bandages the next day, but when I did I found that I was so sensitive to light that I could barely open my eyes. So I paced restlessly in almost total darkness for three days, listening to one audio book after the other.

When the pain and sensitivity subsided and I could open my eyes well enough to look around properly, I immediately noticed that the ocean of color and light that had obscured my view for almost a decade was gone. I had a long way to go before everything was fully corrected, but this was a tearfully positive start.

In the months to come, my eyesight became steadily sharper and after a few progress checks I was OK to resume normal activities (more or less).

While the daily differences were immediately noticeable, the depth of change only hit me when I traveled to Spain a few months later.

I was at the Prado in Madrid and visited a special exhibition by Picasso and Toulouse-Lautrec. The first room in the exhibition consisted mainly of rough sketches, so I didn’t notice anything unusual at first. Then I went to the next hall.

While I’d seen a lot of Picassos hanging there, I immediately realized that in fact I had never really done it seen She. The forced hug, The economical meal, Woman from Mallorca, The serenadeand so on – I had never looked at a painting and seen so much.

The clarity, the depth of field, the colors – everything in the intended places instead of being washed up in a chaotic mess. Was that what everyone else had seen all along?

I walked through the rest of the exhibition in a daze. Everyone else seemed to experience feelings that ranged from mild boredom to lukewarm interest, but moment by moment I wasn’t sure whether to laugh or cry out loud.

Outside, behind the museum, it was pure autumn – multicolored leaves in soft light – and once again I had the feeling that I was seeing it for the first time.

Did you know that the crown of a tree is made up of hundreds of separate leaves? I did not. At least I had forgotten that it was possible to think of it as more than one big stain.

We take too many things for granted – our eyesight, the clarity of a painting, the leaves of a tree – and forget how fragile it all really is. There are times when we can regain what we lost, but those are few. The best we can hope for is getting along with our best in our reality.

I’ve learned not only to appreciate what I have while I have it, but to celebrate it to the fullest.

That means enjoying all the pictures and sunsets that I can see.

Nick Hilden is a travel, fitness, art, and fiction writer whose work has appeared in the Los Angeles Times, Men’s Health, Thrillist, Vice, and others. You can follow his travels and connect with him on Instagram or Twitter.