How circus training helps me cope with my anxiety disorder 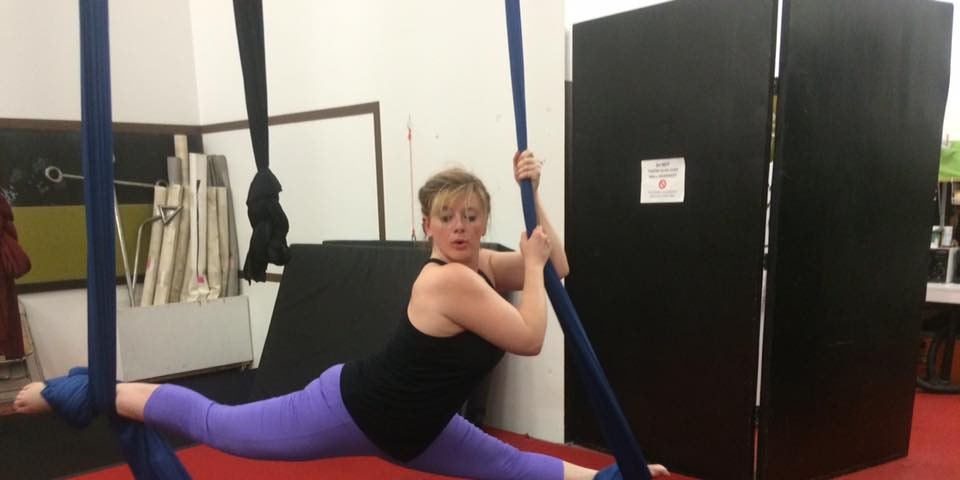 I floated 30 feet above the ground, trying not to look down, a long cloth loop as the only support.

How did I get here?

My heart rate increased before I could stop. The most complicated trick I've ever done was rummaging through the noose from the air. (Did I mention that I was afraid of heights – and is it still?) I was in the circus school, which is located in the building of a former Catholic church, climbed the noose and had my legs crocheted through the fabric.

Nervous as I was, I felt anything but helpless, as I waited, wrapped and at eye level with the choir floor, and my coach called from below encouragements.

"Remember to lower your arms!" She exclaimed. "Do you want me to count?"

I nodded, adrenaline streaming through my veins, fears as the farthest thing out of my head.

I clung to the cloth in each hand.

I let go and raced forward, untangling myself on the way down until I felt the cloth loop under my arms.

"You did it!" My coach cheered.

My heart pounded but I did not panic, instead cheering.

When I was diagnosed with Generalized Anxiety Disorder (GAD) (19459019), I never expected circus training to be part of my coping strategy.

In particular by practicing spin (imagine the apparatus used in an Aerial Yoga class, but higher than the ground) and agility training (which I affectionately call "baby contortion.") In another circus class I hung up over the earth, thinking about when and why my circus training started – and fear was the cause.

I've been feeling anxious for so long – I was crying in college when I had a B in an up got support. I can not make narrow spaces. I know that I will have a bad spell when I sleep. After getting an official diagnosis of anxiety, I started looking for ways to make me feel better. These included traditional tools for coping with anxiety – working with a psychiatrist, medication and the like. But directing my thoughts and body through circus tricks was the socket I never knew I needed.

One evening in 2015, I followed a good friend to a warehouse on the West Side of Chicago. In the year since we met, she had described how she hangs from a harness in the air and her flexibility courses "like yoga, but much harder." The whole thing in the air sounded too terrible to me, but I was intrigued by the latter, and once felt impulsive, so I labeled a Tuesday night.

The third floor of the camp, directly above a bread factory, housed a circus practice site with drop-in courses. I foresaw that this first class is like an advanced yoga session. But that was definitely not yoga: We held right and left for half a minute (60 seconds as if we had not felt that long), kicked our legs up and tried to touch our faces, and circled our arms like little kids playing for the plane, which felt like eternity. After one and a half hours of unconventional stretching and flexibility, I had difficulty walking for three days.

I was not an intense physical activity. I have been learning dance since I was four. But after that hour, I felt something more than pain. I was calm .

I started chasing this emotional high.

I was there every Tuesday (without illness or bad weather) while my coach pulled and poked and occasionally sat on us. (A quick note: Practical training is very common in the circus, and all coaches should be mindful of consent.) Always, fortunately, this has never been a problem with my wonderful trainer, who always asked first and encouraged us to come to our bodies Listening first to avoid injury, especially when working with your back.)

We bent. We twisted. We did splits in the middle, which I especially hate, because it feels like my body is being torn into two pieces by a kind of medieval torture device. I am a fairly flexible person and yet, none of it felt light physically.

But for 90 minutes I could only concentrate on my body. I had to do or I could get hurt. Although I was frustrated – very often – I never cried.

Then I started flight training, where even the smallest movement is incredibly difficult. When my coach suggested for the first time to try air, I laughed in her face. You literally lift your own body weight and fight against an apparatus that gives you bruising or headaches! Two Months Later: I went to a Saturday morning Saturday morning session and made the $ 200 poorer after I had decided to study for eight weeks. But at least I got involved and was there, right?

It was well worth it, despite my nerves. For the next three years, I trained silk, essentially two fabric curtains. Lyra, the head-striking steel bow; and my darling, noose, which is a kind of cross between the two. These more demanding efforts gradually improved my shoulder and general physical strength. Usually I have a kind of scratch, gangrene or bruise or a combo deal of two or three. I can open any glass with the utmost ease. These activities have helped to strengthen my self-esteem and to calm my fears and fears of the unknown, or to be "bad" on something before I even gave it a chance. (Watch a video of my sling work here.)

During the workout, I work to put my elbows on the floor in a backbend, or somersault around a piece of cloth without trying To pinch areas of your body that you really do not want to have kinked, I'm forced to confront my fear. When I think about it, I can jerk off a trick and hurt myself badly. If I have reached my limit without stepping back or asking for help, I can have a scare attack leading to a big breakdown. I have to find the balance by pushing through a sequence and thinking of my own limits – a delicate formula that changes every time. And in the end, it's the liberating feeling to nail a trick or just (gasp!) to have fun .

Still, I was curious: is there any specific reason why circus training helps to ease my well-being? Anxiety

Psychiatrist Monisha Vasa MD, chairman of the Resident Physician Well Being Committee at the University Medicine Center of the University of California-Irvine, believes this. "Certain types of exercises, such as circus training or even Weightlifting bring us to a point where we are intensely focused on the present and not lost in worries about the future," says Dr. Vasa opposite SELF.

It continues: " Studies show a positive influence [of intense exercise] on the central hormonal axis in the body, which is referred to as the hypothalamic-pituitary-adrenal axis," which plays a role in brain and body function is used to adapt to physical or mental stress. Another possible mechanism is that it has been shown that exercise increases the release of natural (or endogenous) opioids, "our own feel-good chemicals". Dr. Vasa adds (think: endorphins ). While these studies are not focused on things like circus stunts or air training, I would say that this falls into the bucket of intense exercise.

Also, "feeling strong helps to reduce some of the [the feeling of] helplessness that can arise along with anxiety," Dr. Vasa. "In addition, as we exercise and our heart rate increases, our brains begin to learn that any increase in heart rate is not indicative of an impending panic attack."

Of course, circus training is not a cure-anything. I take medication. I was in therapy.

I practice deep breathing and other forms of self-sufficiency. I will always have to live with my anxiety disorder.

And yes, it persists during my training, often in unexpected moments. There were times when I needed to learn a new trick because of frustration, panic and all the funny symptoms that accompany anxiety.

But much more than ever: Strength, sweat and waves Adrenaline, which is one of my beloved hobby, leads to an almost overwhelming calm when I finish a session. It helped me create characteristics in me that my fear was long since buried or overwhelmed. So, if this little piece of circus life that I really appreciate works as part of my anxiety treatment and management, I take it.

Lauren Emily has written for Playboy, SELF, and BUST Magazine and is the author of the novel for young adults SATELLITE . It hangs in the air and bends in a strange way every week. Follow her on Twitter and Instagram .